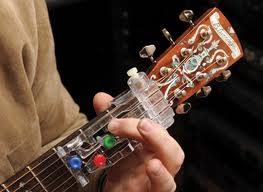 Last season on Shark Tank, Travis appeared with his invention the Chord Buddy seeking $125,000 for 10% equity in his business.  Chord Buddy is a two month guitar instruction system. The base kit comes with the Chord Buddy, Instruction book, DVD, a 2 month lesson plan and a song book with over 100 songs. He originally invented the product to teach his daughter how to play guitar.

Travis made a deal with Robert because he’s also a family man for $175,000 for 20% equity with $50,000 put aside for an infomercial. The Chord Buddy had a follow-up on the Shark Tank Christmas Special last night. During the follow-up Robert fools Travis into thinking they’re having another ordinary business meeting but really it’s to introduce Travis to Chord Buddy’s new celebrity spokesmen and one of Travis’s favorite singers, John Rich.

John congratulated Travis on a great American invention and then the two played a song together. John stated that Chord Buddy will become a worldwide phenomenon. In less than 12 months of partnering with Robert, Chord Buddy has generated 1.5 million dollars.

The success of Chord Buddy after appearing on Shark Tank is becoming a common occurrence for other products as well. If you or anyone you know needs help with an invention idea, please contact us at New Product Consulting.